The score of John Cage’s 0’00” (1962) reads:
In a situation provided with maximum amplification, perform a disciplined action.
This realization of 0’00” involves 5 maximally amplified contact microphones, connected to keys on the performer’s laptop.  The return key and the C, A, G, and E keys are amplified (in honor of the tradition, at least as old as J. S. Bach, of using the letters in composers’ names as pitch material or structural limitations in a work).

The “disciplined action” in question is a live transcription of another John Cage piece, the Lecture on Nothing (1949).  As the performer listens to the lecture privately, he publicly presents the artifact of an written transcription.  The obstructive force of the contact microphones, as well as the stenographic limitations of transcribing the spoken word, will lead to a visual artifact shot through with imperfections.  The aural artifact, the sound of the keyboard as transmitted through contact microphones, an exploration in its own right into the rhythmical possibilities of the modern keyboard, remains, perhaps as mere byproduct 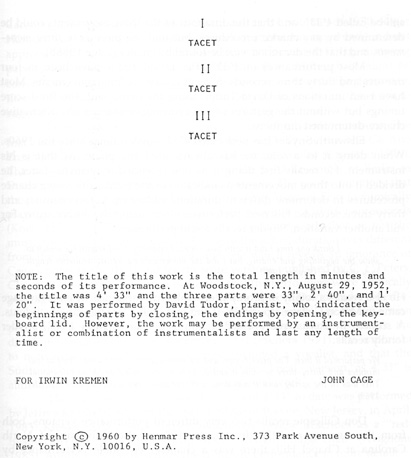 Posted by John Roach at 3:39 pm Sound Showcase 2013 - The Conversation